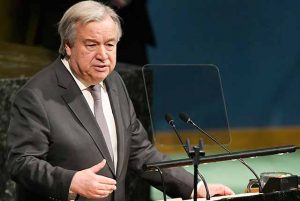 Picture courtesy: www.un.org. The former Portuguese prime minister, who has been at the helm of the UN since January 2017, says mental health remains critical to the achievement of the 2030 Sustainable Development Goals.
António Guterres: Mental health critical to achieving global goals
Opinion May 09, 2018

One-fourth of the global population suffers from some mental health issue and still the problem gets ignored, Antonio Guterres, the Secretary General of the United Nations, said recently. The words of caution came during a recently held roundtable discussion on mental well-being, which was jointly organized by the UN, the World Health Organization (WHO), and charitable body Wellcome Trust in London.

The all-important discussion coincided with the beginning of the observance of Mental Health Month in the United States. As per a Mental Health America report, 20 percent American adults have some mental health condition once in their lifetime. It also highlights that while more Americans have access to insurance and treatment services as compared to previous years, most of them still lack access to care.

Emphasis on tackling mental illnesses from the roots

Guterres elaborated how “the UN is committed to working with partners to promote full mental health and well-being for all” in spite of the alarming statistics pertaining to mental health. He expressed his thoughts on how mental health remains critical to the achievement of the 2030 Sustainable Development Goals (SDGs) despite being a neglected health issue worldwide. The event underlined the need for more awareness about the notion that “there is no health without mental health.”

The participants agreed that to tackle the root causes of mental illnesses, there was a strong need to explore and experiment with solutions that expand beyond the horizons of health sector and have proven potential to bring about the desired changes. The discussion concluded on the note that “inadequate care does not come about in a vacuum, and there are societal as well as environmental factors involved.”

While in London, Gueterres also met with Prime Minister Theresa May to recognize how her country continues to be a leading contributor to the global issue of mental health, from the time it was “a founder of the UN, to present when it is a permanent member of the Security Council and a pillar of multilateralism,” a UN release said.

It is important to focus on spreading awareness about the fact that mental illnesses are treatable. Breaking the stigma and encouraging people to come out in open to discuss their mental health problems can be of help to them as well as those living in denial.

Unless there is better awareness about the availability of mental health treatment provisions and services, the mental health crisis may continue to deepen. As the UN chief stressed, once the efforts are redirected from preventing people from staying in the dark to enabling them with ways that can help them in seeking help or support, it is likely that the vicious circle of stigma may see its dreadful end.