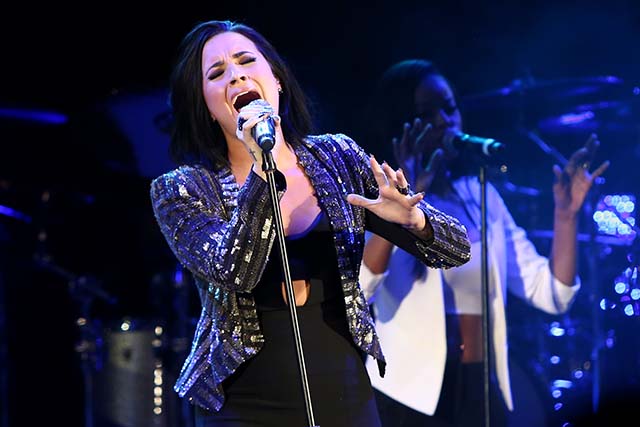 Just a couple of days ago, she was a motivation for thousands of people hooked on heroin and opioids, struggling with their deadly habits. But now she seems to have become a typical case study for drug relapse and how naloxone acts as a savior in the eventuality of an opioid overdose. The good news is, Demi Lovato seems to have survived a death scare after a suspected heroin overdose. Thanks to the doses of Narcan, stocked up while the celebrity and her companions allegedly binged on heroin.

The 25-year-old singer-actress was found unconscious in her Hollywood Hills home in California on July 24, 2018. She was rushed to a hospital in Los Angeles, where her condition is reported to be “stable.” An official statement from her representative, however, denied some media reports and sought privacy as she continues to recover.

“Demi is awake and with her family, who want to express thanks to everyone for the love, prayers and support… Some of the information being reported is incorrect and they respectfully ask for privacy and not speculation as her health and recovery is the most important thing right now,” Lovato’s representative said in the statement.

There is no confirmation whether Lovato actually did heroin. But only four months ago, in March 2018, she had celebrated six years of her sobriety after falling into addiction trap early on in her life. She has been candid about her struggles with substance abuse as well as mental disorders. To mark the six years of sobriety, she had tweeted in March 2018: “Just officially turned 6 years sober. So grateful for another year of joy, health and happiness. It IS possible.”

“A huge part of my recovery was learning to love myself and to give back to others,” the actress who turns 26 next month had said in an Instagram post then. In an emotional address to her fans during her concert at Brooklyn’s Barclays Center, Lovato also talked about her decision that changed her life and made her reclaim sobriety. She recalled how she had discovered that she was becoming like her abusive father and that something needed to be changed and she needed to get sober.

Not just addiction, Lovato also opened up about her struggles with bipolar and eating disorders as well as self-harm. She said that she decided to share her story with others who were dealing with similar issues, that it is okay to have a mental illness or an addiction problem. But it is important to take care of own self. She also spoke on the importance of raising awareness about mental health issues and taking the stigma away from it. By sharing her personal struggles she could help others who do not have the courage to ask for support, she felt.

She had previously shared her journey of sobriety in two documentaries – “Demi Lovato: Stay Strong” in 2012 and “Simply Complicated” in 2017. She admits that staying clean is an everyday battle. Some days are harder and some easier, but one needs to stick to his/her goals.

If reports are to be believed, Lovato’s friends feared an incident like this. “They keep Narcan on hand for such situations – they were prepared for this. The people she has been hanging around lately aren’t her real friends – they don’t have her best interests at heart. She’s pushed her true friends away,” the People reported quoting an insider.

If true, the singer was lucky to have Narcan – naloxone in the form of a nasal spray – around. For, the world has witnessed untimely demise of music icons like Michael Jackson and Prince, who are seen as the victims of opioid epidemic that claims thousands of lives every year in the United States.

Addiction is a disease that requires proper treatment, just like any other disorder. The stigma attached to it acts as the biggest hindrance to recovery. Sober tales of celebrities like Lovato act as a catalyst for the people struggling with drugs and alcohol. On the contrary, delay in proper treatment may lead to deadly consequences.