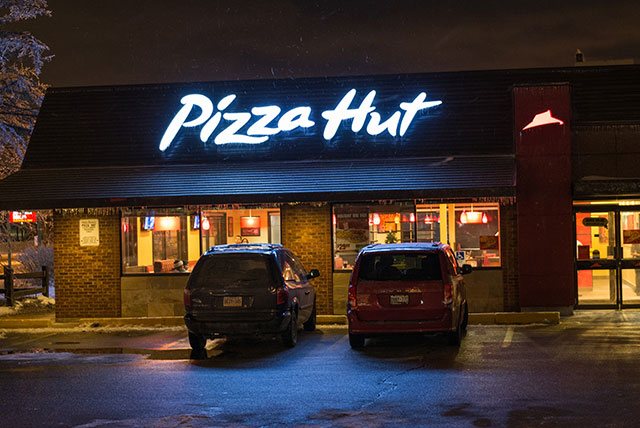 In a move to gain an edge over competitors and give its customers a delightful experience, Pizza Hut has announced to deliver beer and wine along with pizza beginning January 2018. In an announcement made on Dec. 5, 2017, America’s largest pizza chain said that the service will begin in Phoenix, Arizona and gradually move to other cities in the U.S.

Six-packs of Anheuser-Busch brands, including Bud Light, Budweiser, Shock Top and Kilt Lifter beers, along with pizza will cost flat $10.99. While the brand has decided on the beer options, it is yet to determine which wines to deliver and in what quantity. “We’re excited to offer the convenience of beer and wine delivered to a customer’s home,” said Stacy Lynn Bourgeois, director of brand marketing at Pizza Hut.

The company with more than 16,000 stores across the world, serves alcohol at many of its locations. Though it began selling alcohol at its sit-down restaurants in 2016 nationwide, the new move will bring alcoholic beverages right at the client’s doorstep. As per Bourgeois, “We’ve been laser focused on digital and delivery for a while now. I think this is really one way where we can provide a unique Pizza Hut delivery experience.”

With the new move, the brand aims to provide a unique delivery experience to its customers. The brand that has been known to stay ahead of its rivals had earlier announced ramping up technology and upgrading equipment when it received a $130 million investment. By the end of the year, the chain plans to hire 14,000 new drivers.

In an attempt to curb underage drinking, the company has said that all the customers who place the order for the pizza and beer combo will be required to show their IDs at the door and all the drivers with beer and wine deliveries will be at least 21 years old.

Alcohol is a growing problem

In the U.S., now, more Americans are drinking high amounts of alcohol, with a greater number of drinking patterns reported among women and older adults. Some of the contributing factors to the rise in the drinking habit may be attributed to easy availability, increased stress as well as income and educational disparities.

Though the recent move could be a game-changer in pizza delivery, it might add to the existing problem of alcohol addiction in the country. The problem is further exacerbated by the recently proposed tax cuts for the wineries, breweries and distilleries. There is a cut down of federal alcohol excise taxes by 16 percent over alcoholic beverages, including beer, wine and liquor, over the next two years and covers both domestic and imported beer, wines and spirits.

Alcohol-related problems claim an estimated 88,000 American lives each year. Drinking too much can cause one to experience a range of negative health consequences like mental health disorders, risk of certain cancers, cardiovascular problems and alcohol use disorders (AUDs) among others. Considered to be the third leading cause of preventable deaths in the U.S., abstinence is the best way to lead a healthy life. A holistic treatment plan for overcoming alcohol addiction comprises medically assisted detox, medications and therapy.